“Turning collector cars in to a career”

For over a decade, Dylan Miles has learned the ins and outs of the trade from the very best names in the classic car world and, similarly, forged relationships with some of its most influential figures. Hence why he’s founded his own company specialising in sporting and classic automobiles…

For Dylan Miles, a lifelong fascination of old cars and bikes was inevitable. His father, Simon, dedicated his life to restoring rare Brough Superiors and Dylan grew up surrounded by the ‘Rolls-Royces of the motorcycle world’. But while he loved those exotic two-wheeled machines, it was his father’s classic cars – including an Aston Martin DB5 Convertible and a Ferrari Daytona – that really piqued his interest and led him to forge a long career in the motor trade, encompassing some of the most significant and influential dealers in the business, including Fiskens and JD Classics. Seeking a new challenge, and looking to capitalise on the knowledge he amassed and the connections he made, Dylan established his own business late last year and recently moved into a dedicated showroom in East Sussex. We picked him up from his father’s extraordinary workshop of Broughs and headed straight to his new home from home.

What are your earliest automotive memories?

I remember coming home from school and there would be Brough Superior engines in the kitchen. My dad would heat up the crankcases in the oven so the new bearings would fit, which drove my mum insane! Dad started restoring Broughs in the late-1970s and has become the worldwide go-to guy for them. He was actually chosen by the National Motor Museum to rebuild all the important pre-War competition bikes that were damaged in the tragic fire that took place there in 2003. His enthusiasm for bikes – and cars – undoubtedly shaped my interest. My first word was ‘car’ and I actually learned to read using car books.

Given your upbringing, why did you follow a career in cars instead of bikes?

Growing up in the Brough Superior world was a baptism of fire and, of course, I’m still incredibly interested in them. My dad was fortunate to have known some of the gentlemen who raced these bikes at Brooklands, and I remember going to the early sprint meetings there in the 1980s. Dad took the mauve SS100 Works sand racer along with three 1000cc Brooklands Zeniths and ran them there in anger on many occasions. I still have a huge amount to learn – in fact, we’ve just sold a fantastic SS100 from 1930 on behalf of an American client. But I’ve always gravitated more towards cars. I can ride a bike but I don’t ride a bike on the road because I value my life too much. You’ve got to know your limitations.

Could you tell us about your career in the classic car industry prior to founding Dylan Miles Ltd?

I’ve worked with some great companies, including RM Sotheby’s, Fiskens, Autosport Designs in New York, and JD Classics. Lots of people joked about how many different jobs I’ve had in the motor trade, but then there’s method to my madness because I’ve forged very good relationships with a lot of significant and influential people, from whom I’ve learned a lot. And today, everyone who I’ve worked with in the past I’m still doing regular business with, so it’s paying dividends.

What prompted you to establish your own business?

I was 32 years old and I knew that the time was right. I’d returned from America, where I was working for Tom Papadopoulos at Autosport Designs, and spent the best part of a year at JD Classics. I enjoyed both, but I found myself wanting to do more. Ultimately, I reached a stage where I was fairly unemployable, so I figured that it was the right time to do it! I’ve known my business partner Michael Crouch since we were 14 years old – we grew up together and he’s one of my best mates. He was working in a corporate finance role in the Middle East and looking for more excitement from his next endeavour in the UK, so the timing was perfect to collaborate.

How would you describe the philosophy of the business?

Transparency is key – one of the things that today’s buyers and sellers want to know and be sure of is that they’re getting a fair deal. That’s why we clearly state our commission terms on our website. We want our customers to have a straightforward and enjoyable experience. That way, they’ll come back. We’ve had lots of repeat customers and we do regular business with numerous people I’ve met over the years. It works well.

Is there any particular type of car or marque towards which you gravitate?

Aston Martins are an important part of the business – I grew up around them and my dad’s had his DB5 Convertible since 1985, the year my twin sister and I were born. It was the 1964 Earls Court show car, which, aged nine, he saw when he visited the show with his father. Some years later, he was able to buy it and has kept it ever since. That car has undoubtedly helped to shape my career and I’ve certainly utilised it as best I can. Also, when I was a child my dad was very good friends with the late Vic Bass, the long-standing Aston authority in Battersea – coincidentally very close to where I live now – and he taught me a lot about them. He was a kind man who employed me as a teenager at his arch on Queens Circus during my school holidays.

Of course, Ferraris play a big part as well. My dad had a Daytona for 17 years and the silver six-carb 275 GTB we’ve got here today is particularly special to me. It belonged to a family friend of ours from the Brough Superior world. He sadly passed away in 1999 and my dad and I tried to buy the Ferrari. I remember being in awe of this beautiful thing as we drove up the bypass at over 100mph. Unfortunately, we couldn’t quite agree on a deal and the car was subsequently sold at auction. But I’ve tracked it ever since I was 14 years old and in January of this year, I was able to broker a deal with one of our very good clients. Hopefully, he’ll get many years of enjoyment from it.

How would you assess the current state of the collector car market?

I think that buyers are more discerning today than in recent years and people want to feel like they’re getting a fair deal. The challenge for us is to find good stock to consign. If the cars are good to begin with, then that’s half the battle fought. It can be hard to value certain cars today, though. People use auction results as barometers, which is understandable, but there are a lot more factors and variables involved, especially with more esoteric machines. We’ve got a very fair commission structure and we work really hard to achieve the best results for our clients.

Your stock appears to reflect the current trend for younger classics – is this a deliberate move?

Cars come in and out of fashion – when I was a young kid, brass-era and pre-War cars were the absolute height of the market, but the demographic is changing and we’re seeing younger buyers come in. It’s challenging because unless you were brought up around vintage and veteran cars and bikes, they’re unlikely to ever enter your sphere. Furthermore, while they’re marvellous things, they’re very labour-intensive, which can be off-putting for those used to more modern machinery and who want to use their cars – something we very much encourage. We’re seeing people who worked hard in their thirties and forties and now have the disposable income to buy something a little more modern and practical, be it an Aston Martin DB5 or a Porsche 930 Turbo.

Where do your personal automotive tastes lie?

I pick and choose the cars we sell based on my tastes, but obviously, my personal budget doesn’t stretch as far as many of the cars in which we deal! For everyday use, I’ve got an Alpina B3 Bi-Turbo. And I’ve got a Jaguar Mk2 3.8, which my girlfriend and I are taking on the Tour Auto this year. It’s great fun because you can take four or five of your friends along with you. I appreciate anything with four wheels, but while I appreciate modern technology, I really love the rarity of older cars. If you go to central London, there are new Ferraris, Lamborghinis, and McLarens on every street corner. But if I see an old car, such as a Jaguar XJ6 or a Ford Capri, I get really excited. Cars don’t need to be exotic to be appreciated.

What was the most memorable car you’ve ever sold?

I’ve been fortunate to be involved in the sales of numerous significant cars, and it’s probably easiest to categorise them buy the jobs that I had. At JD Classics, I was able to acquire the Le Mans class-winning Jaguar XJ220 and help to sell the Aston Martin DB2/4 Bertone Spyder, which we covered together for Classic Driver. At Autosport Designs, I sold a time warp Aston Martin DB6 Shooting Brake, which had been owned by one man. At Fiskens, there was the ex-Works Aston Martin DB3S, and at RM Sotheby’s, I was involved with the 100-plus collection of Ducatis sold in Monaco. I enjoy every deal, large and small, and I do this fundamentally because I enjoy interacting with owners and playing a small part in the cars’ histories. I don’t know anything else – it’s thrilling to be a part of it! 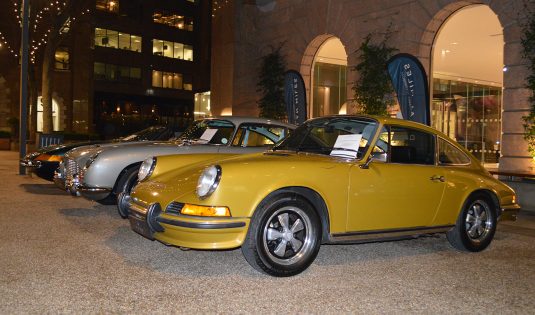 On Thursday 12th April, the Devonshire Club hosted an evening of car talk with Dylan and our friend Sam HancockRead More 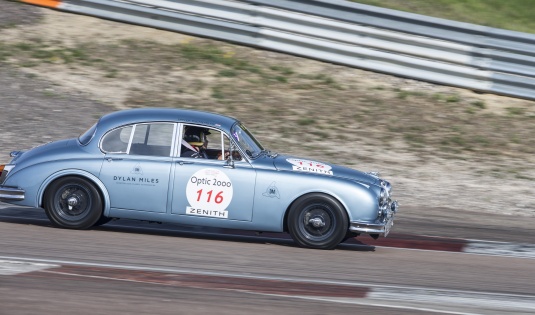 We participated with great enthusiasm in the 2018 Tour Auto with our 1962 Jaguar 3.8 Mk2, here are a selection of images from this wonderful event!Read More 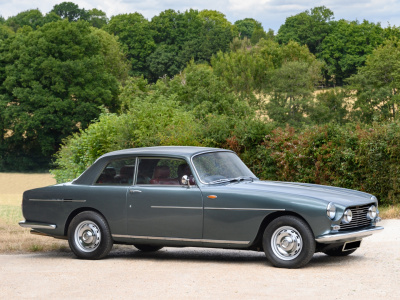 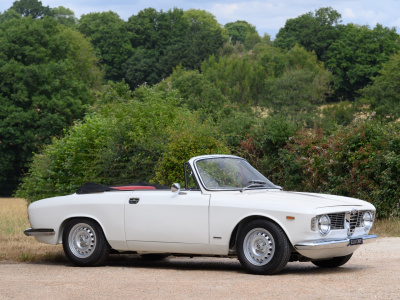 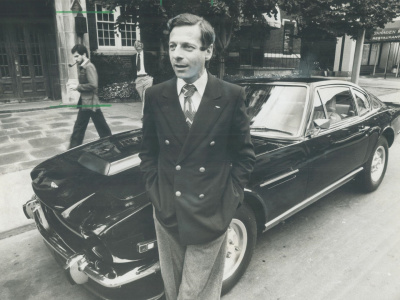 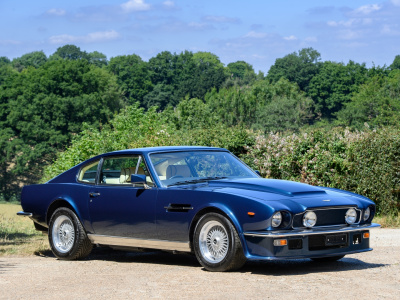