According to the original invoice on November 4th 1987 from Aston Martin Sales Ltd of Cheval Place, London, this lovely V8 was ordered by Mr Peter Steer Esq of Amersham, Buckinghamshire, to be finished in Chichester Blue with Parchment hide piped dark blue

Specified with automatic transmission and (V585) fuel injected engine, Mr Steer part exchanged his 1980 Aston Martin V8 Saloon ‘GYV 900W’. Maintained by the factory throughout the early part of Mr Steer’s ownership, the first service was completed at 932 miles on 7th March 1988. The V8 returned to the factory on 29th December 1988 for a 10K miles service at 2468 miles

By 1994 the V8 required some minor attention to the chassis/sills which was completed by Oselli that November. Oselli continued to maintain the V8 for Mr Steer on an annual basis until 2004, by which time the V8 had covered 29,000 miles. Invoices held on file document the ‘no expense spared’ attitude that Mr Steer took when maintaining his cherished Aston

By 2008 the V8 had been sold to respected independent dealer Bramley, Surrey, who commissioned a full re-paint of the car by Panel Wise of Weybridge and subsequent major service and recommissioning work by Aston Martin Works Service, at a cost of GBP 9,474, on 11th December 2008 with mileage reading 34,966 miles. Following the aforementioned works, the V8 was treated to a full carpet replacement with Wilton carpets by Elite Coach Trimming, Northants

By 2010 the V8 had been sold to Mr Jean Christophe Gras of Versailles, France, who entrusted Aston Martin main agents Auto Performance of Paris to maintain the Aston (invoices held on file) throughout his custody. Acquired by the vendor from Mr Gras on December 12th 2014 with the mileage at just over 35,000 miles, the V8 was repatriated to the UK and joined a private collection of classic sports and racing cars based in Kent

Driven on high days and holidays and maintained ‘in house’ by the vendors personal mechanic, the V8 continued to be extremely well looked after and cherished as it always had been. Offered today in superb condition throughout with documented 41,000 miles from new, this superb late model with fuel injection is supplied with original handbooks, original service books, original purchase invoice and extensive maintenance records. Previously supplied by us in 2020, at which time the car was sent to marque exponents R.S.Williams for fitment of Ronal wheels and an RSW handling kit

One of just 61 ‘Series 5’ (V585) V8 Saloons constructed by Aston Martin, this superb example is presented in its original colours and drives as well as it looks. This eminently usable and attractive V8 offers superb value for money today 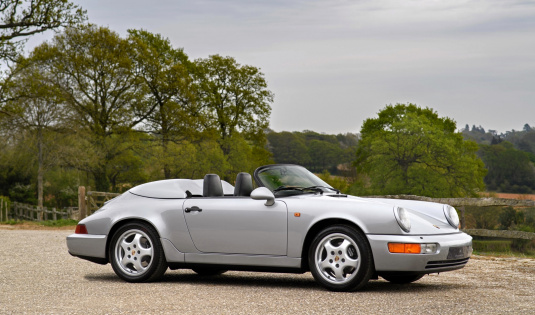 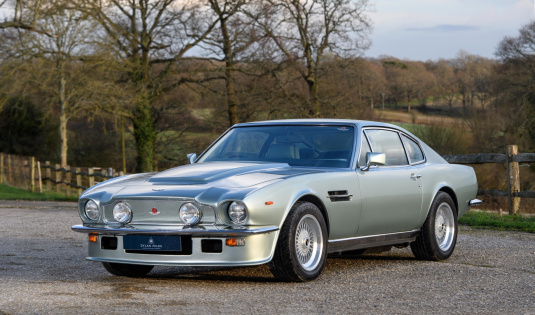